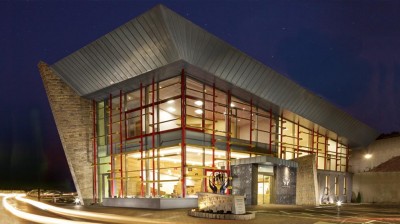 Donegal Credit Union opened the doors of its new purpose built facility in late 2015. The contemporary building was designed specifically for the current and the projected needs of the business.

McCabe Architects designed an extension to Donegal Credit Union's previous premises on Tírchonaill Street which opened in 2008. Following this, the business grew substantially and in 2014 a decision was taken to move to a new premises. From inception to completion the project lasted 17 months with the building opening in November 2015. In the 5 months following its opening the customer base has grown an additional 7% demonstrating the influence architecture can have in commercial activities. (source Donegal Times, March 2016)

The new building is a contemporary standalone structure. It rises from the rear of the site to a two and a half storey structure on the north side overlooking the town centre. Viewed from the east, a striking sandstone spine wall with feature windows gives the building a strong identity on what is a very prominent site. The spine wall makes the connection back to the steep hillside. On the west, the building is more transparent. Wrapped by a curtain glazed walling system on two sides, it is inviting for the public to use. The use of a stone wall feature at the main entrance draws the public inside. An external brise soleil system adds a second layer of interest to the building envelope, ever changing in appearance as the sun moves around the building. The projecting soffit is clad in zinc.
This proposed cornerstone development of Miller's Hill presents a unique opportunity to improve the surrounding area that will inevitably enhance the immediate environs physically, socially and economically.
See our youtube channel for a timelapse video showing the early stages of construction. A complete video will be uploaded in due course.